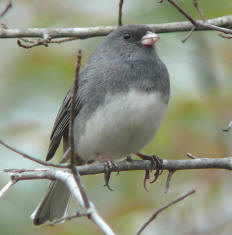 Because of their ability to regulate the expression of many traits simultaneously, hormones are a major physiological factor underlying the integration of the phenotype. In songbirds, testosterone is particularly important for the expression of several traits related to obtaining mates. In collaboration with Ellen Ketterson, we have explored individual variation in testosterone-mediated phenotypes in dark-eyed juncos.

We found that many traits are associated with short-term fluctuations in testosterone levels mediated by the release of gonadotropin-releasing hormone (GnRH) in the brain. Such short-term testosterone elevations were associated with variation in territorial behavior, parental behavior, and plumage and seem to underlie the fundamental trade-off between mating effort and parental effort experienced by male juncos.

Testosterone is also intimately related to fitness. We found strong stabilizing selection on testosterone production via both survival and reproduction. This suggests that selection favors a stable combination of testosterone-mediated traits, which should maintain the current pattern of physiological integration.

In collaboration with Bob Cox at the University of Virginia, we are combining endocrinological and quantitative genetic approaches to understand how hormones shape underlying genetic architecture in Anolis lizards, which will provide further insight into the role of hormones in the evolutionary process.

We are also interested in how physiological traits evolve when populations colonize new environments. To this end, graduate student Tamara Fetters has recently examined the evolution of thermal physiology in invasive brown anoles.