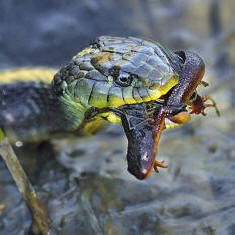 Garter snakes in the genus Thamnophis are one of the best examples of evolution in action. These snakes consume some of the most toxic animals in the world, newts in the genus Taricha, which can produce enough tetrodotoxin (TTX) to kill most potential predators. The snake’s resistance to TTX derives in part from evolutionary changes in voltage-gated sodium channels expressed in skeletal muscle (encoded by the gene SCN4A). TTX blocks these channels in other animals, but not in garter snakes.

SCN4A belongs to a family of genes that in tetrapods consists of nine different genes expressed in different tissues of the body. In order for a snake to survive when eating a toxic newt, it must maintain the functionality of other tissues with voltage-gated sodium channels. Thus, we expect other genes in this family, which are expressed in tissues such as peripheral nerves and brain, to exhibit parallel adaptation to TTX. We have recently found that at least two other sodium channels, encoded by the genes SCN8A and SCN9A, show TTX resistance in garter snakes. We are currently tracing the evolutionary histories these genes to determine the evolutionary history of TTX resistance in snakes.

Because TTX resistance seems to rely on evolutionary changes in multiple genes, we can use it a tractable model system to study the origins of complex adaptations at the molecular level. In a project recently funded by NSF, we are exploring the evolutionary patterns of the SCNA gene family across a wide variety of reptiles, including lizards and birds, to determine whether evolution . We are currently looking for graduate students to work on this project.