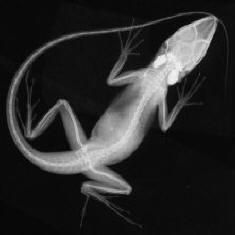 We know little about how patterns of genetic correlations (the “G matrix”) evolves in nature. Caribbean Anolis lizards provide a unique opportunity to study the evolution of G because morphologically similar habitat specialists (or “ecomorphs”) have evolved multiple times in different lineages, allowing us to separate the effects of shared history from shared ecology. In collaboration with Butch Brodie and Jonathan Losos, we have measured the G matrix in seven Anolis species that represent unique origins of three ecomorphs from three different lineages.

We are also using this system to ask quantitative genetic questions about development and sexual dimorphism. In collaboration with Bob Cox, we are examining evolutionary patterns of between-sex genetic correlations  within a single species, the brown anole (Anolis sagrei). This lizard is highly sexually dimorphic, but the degree of dimorphism varies highly across populations, allowing us to explore evolutionary changes in the genetic variation underlying sex differences.