It’s been almost a year (363 days, to be exact) since my last news post. That doesn’t mean nothing has happened in the lab, though. In fact, it’s quite the opposite. The past year has been such a whirlwind that I haven’t been able to keep up! So here’s my attempt to catch up with what has happened in the past year.

If you’ve looked at the people page recently, you’ll notice the lab is fairly small right now. That’s because many of our lab members have gone on to bigger and better things.

First, former postdoc Sarah Foltz started a job as an Assistant Professor just up the road at Radford University. She’s now in the process of getting her new lab up and running. She’ll be focusing her research on the effects of urbanization on behavior and physiology and songbirds. I’m really excited for Sarah as she begins this next chapter in her career, and I’m looking forward to continuing to collaborate with her in the future!

In August, Tamara Fetters became the first Ph.D. graduate from the McGlothlin lab! She defended her dissertation, “Physiological and life-history trait variation in an invasive lizard, Anolis sagrei,” and passed with flying colors. Tamara published one chapter from her dissertation last fall. Keep an eye out for more publications to come. Tamara recently moved to North Carolina, where she’s pursuing her next step. Congrats Tamara!

It’s been a really busy year for meetings. I racked up frequent flyer miles attending the American Genetic Association President’s Symposium in Toronto in March, the Yodzis Colloquium at the Canadian Society for Ecology & Evolution in Guelph, Ontario in July, and Evolution 2018 in Montpellier, France in August. Check out my tweets from #CSEE2018 and #Evol2018 for details. I had a great time at all of these meetings and met many new people. I also presented some new unpublished work on sexual dimorphism and social interactions in networks that will keep me busy writing for the next few months.

Grad student Kerry Gendreau attended SEPEEG 2017 in North Carolina, and we’re all headed to SEPEEG 2018 at Mountain Lake next month.

In addition to Tamara’s paper mentioned above, the lab has a number of new publications I’m excited about. First, in collaboration with P. O. Montiglio and Damien Farine, we published our first paper on how indirect genetic effects work in complex social networks. Collaborator Mike Logan published a paper on the quantitative genetics of thermal physiology in brown anoles, and the garter snake genome paper finally came out in Genome Biology and Evolution. See Mike’s Anole Annals post to learn more about his study. Here’s a Twitter thread I wrote about the garter snake genome, which fills in some critical pieces on the coevolutionary arms race between snakes and newts.

Finally, the first part of the Anolis G-matrix study I did as a postdoc with Butch Brodie and Jonathan Losos came out in Evolution Letters. I wrote a blog post explaining why we’re so excited about these results. Check it out.

Kerry Gendreau a recipient of a 2018 Graduate Research Excellence Grant (R. C. Lewontin Award) from the Society for the Study of Evolution. She’ll be using the funding to study the effects of sex linkage on voltage-gated sodium channel evolution. Congrats!

I am a co-PI on a new NSF-funded project led by PI Bill Hopkins in Fish & Wildlife Conservation along with co-PI Rich Helm in Biochemistry. We’re looking forward to learning about why hellbender fathers sometimes eat their young.

The blog Nothing in Biology published a little piece I wrote on surviving the pre-tenure years, which tells the story of my job search and my years as an assistant professor at Virginia Tech. Luckily, I managed to make it through–I was promoted to associate professor in June!

Those are the highlights of 2017-18. I plan to spend the next year teaching, writing papers and grants, and rearing a few more lizards. I’m also recruiting a grad student or two, so contact me if you’re interested!

It’s been way too long since the last post, so it’s catch-up time! The last year (OK, the last 13 months) has flown by but has been action-packed.

First, I want to welcome some new personnel to the lab. Angela Hornsby joined us as a postdoc in January after defending her Ph.D. at the University of Nevada, Reno last December. Angela has been working on our project on voltage-gated sodium channel evolution. She brings some important new skills to the lab, including expertise in building bioinformatics pipelines and DNA sequencing by target enrichment.

Kerry Gendreau joined the lab as a new Ph.D. student last month. Kerry earned her master’s degree at the University of Massachusetts, Lowell and has since been working at Virginia Tech as a technician in the Kojima Lab. She’ll initially be working on the sodium channel project, but she is currently hard at work developing her own ideas for a thesis project. Kerry is also a fellow in the Interfaces of Global Change program.

The lab welcomed three new undergraduate researchers. Maeghan Klinker started in the spring semester and continued as a summer REU student. (Unfortunately, she’s off studying abroad in Scotland this semester, but she’ll be back next spring.) Rob Hadad and Madison Thammavong just joined the lab this fall.

We also said goodbye to some McGlothlin Lab members this past year. Former graduate student Julie Wiemerslage decided to leave the program last fall to pursue a master’s degree in sports management at the University of South Carolina. Lab manager (and former McGlothlin Lab undergraduate researcher) Thomas Wood left the lab this summer to pursue training in information technology. Finally, five of our undergraduate researchers, Arin Davis, Mackenzie Huber, Emily Meeks, Blake Spiers, and Emily Watts graduated this past year. All of them have some exciting post-graduation plans. I’m particularly thrilled to report that Emily Watts has decided to continue her studies in evolutionary biology and has started as a Ph.D. student in Shawn Kuchta’s lab at Ohio University. We wish everyone the best!

Sarah, Tamara, and Emily Watts attended the SICB meeting in New Orleans in January. Emily presented a poster on some of her undergraduate research, which was the subject of a post on Anole Annals, and Tamara presented a talk on her work on egg-laying rate and incubation time in invasive brown anoles. (Tamara’s work was just accepted for publication, so stay tuned!)

Angela and I both attended the Evolution meeting in Portland in June. Angela presented hot-off-the-Illumina results from our sodium channel project, and I presented some older (but still unpublished!) results from a study of Anolis G-matrix evolution. Here’s a write-up from Anole Annals. (That manuscript is ever-so-close to being ready to submit, so I hope to be able to report on it here soon.) Bob Cox was also there presenting some of our collaborative work on brown anole quantitative genetics.

Speaking of Bob Cox, he and I have published two papers from our collaborative work in the past year. First, our study integrating quantitative genetics and sexually dimorphic gene expression was published in American Naturalist. Bob wrote up a nice post on the paper for Anole Annals, so read all about it there. A second paper on dewlap quantitative genetics was published in Journal of Evolutionary Biology and selected for the cover.

I talked to Jim Metzner for a two-part story on newts and snakes for the public radio program Pulse of the Planet.

I spent  all my time this summer writing grant proposals, and I just turned in my tenure application a few weeks ago. All my fingers are crossed.

Phew! That’s it, unless I forgot something. Back in less than a year, I promise!

We have finally updated our lab webpage after a long hiatus. I have added a lot items to the Lab News section for events that happened during the fallow period. I’ve also updated lots of the old posts with more information and pictures to give you a better idea of what we’ve been up to over the years. Now that the lab website is powered by WordPress, new updates should happen a lot more frequently!

I am now an associate editor for the new open access journal Ecology and Evolution, published by Wiley. The journal’s goal is to publish sound science without regard to novelty. In that sense, E&E is similar to PLOS ONE, but E&E is much more focused and should be more visible to ecologists and evolutionary biologists.

It’s taken awhile, but my lab is finally looking ship-shape. Here’s the main lab, where we’ll do both molecular and lizard-based work. 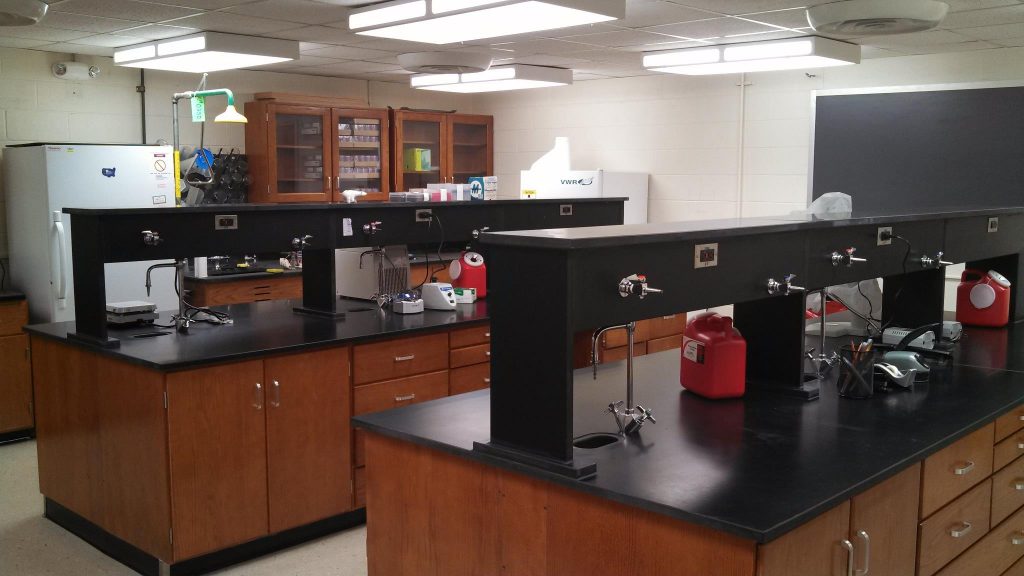 And here’s the newly renovated Anolis breeding facility, currently devoid of any anoles to breed. You can see that we’ve got our work cut out for us assembling all those shelves and light fixtures. 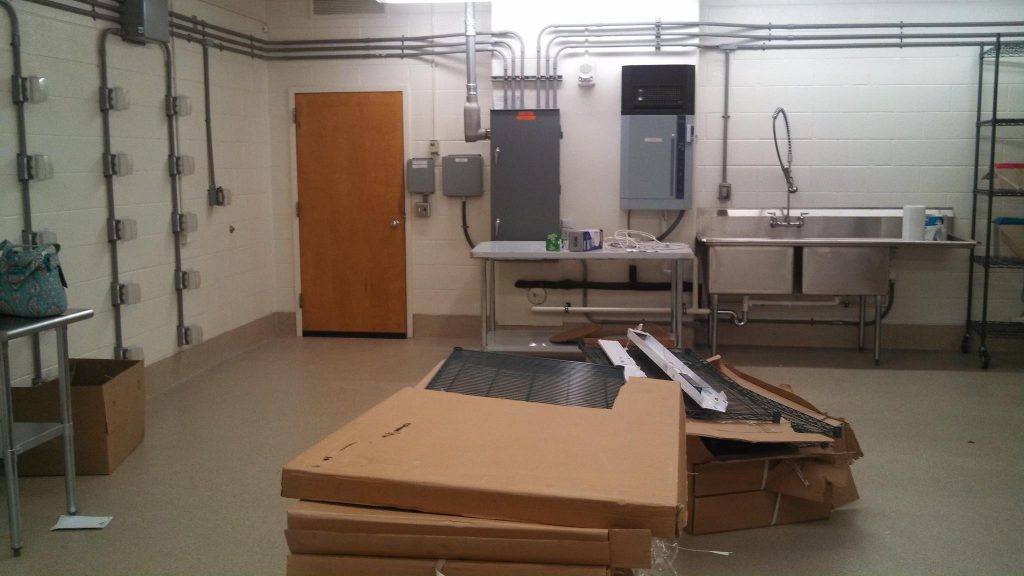 I have officially joined the faculty of the Department of Biological Sciences at Virginia Tech, and the McGlothlin Lab is open for science!